You are not going to die from this

Dr. Robert Malone: This is the Largest Experiment Performed on Human Beings in the History of the World. 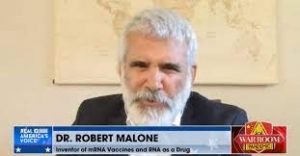 In an exclusive and explosive one-hour interview with Veronika Kyrylenko of The New American, pioneering mRNA scientist Dr. Robert Malone explains the intensely corrupt workings of the government regulatory bodies that have mismanaged the pandemic, discusses the problems with the vaccine program and delves into potentially explosive and game-changing revelations about the shady origins of the Covid-19 pandemic in Wuhan, China.

Who is Dr. Robert Malone? While working at the Salk Institute in 1988, Dr. Malone discovered important findings about in-vivo and in-vitro RNA transfection. He continued his work on the technology a year later at the biopharma start-up Vical where he conducted additional experiments. According to his bio, “The mRNA, constructs, reagents were developed at the Salk institute and Vical by Dr. Malone.” His research has also included important work on DNA vaccines. In addition to his fundamental work developing mRNA and DNA vaccine technology, Malone is also a medical doctor. According to his bio, Dr. Malone “received his medical training at Northwestern University (MD) and Harvard University (Clinical Research Post Graduate) medical school, and in Pathology at UC Davis.”

Few people are as qualified to comment on the course of the COVID pandemic and the mass vaccination campaign as Dr. Malone. In this important interview he shares his unique and deep insights on matters of critical national and international importance.